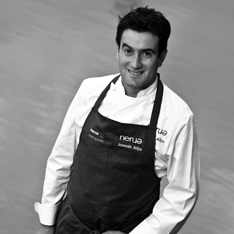 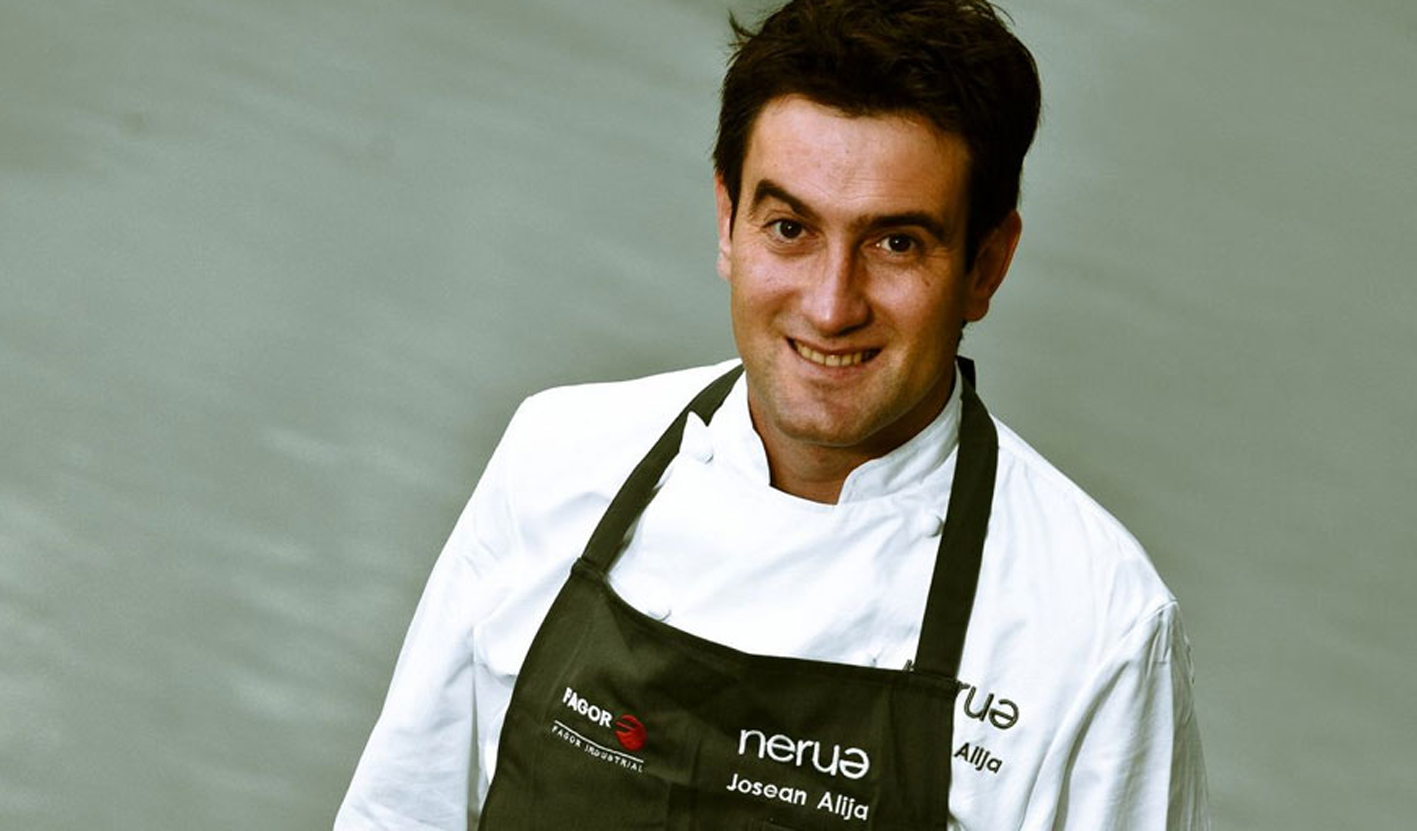 Josean Alija began his professional career at age 17. Under the tutelage of the great contemporary master chefs, he has cultivated his own style. A purist style in that aromas, textures and flavors are the principle components , but at the same time an avant-guard style that even Chef Paul Bocusse identifies as “one of the best kitchens in his life.”

Alija, loyal to his affliction for challenges, proposes to surprise whoever tastes his work with the essence of the land and its products. Around this axle he has built his kitchen and has been recognized with multiple awards: the Award for the Best Young Chef in 2000, Best International Chef for Identita Golose in 2009 and Prize for Conceptual Innovation in 2010 are examples of his renown in the International sphere.

His creations such as the roast duck foie gras with crystalized carrots (most artistic plate in 2002), the caseina shake with strawberries and violets (most beautiful plate in 2003), or the cold, sour cocoa juice with ice cream and anisettes (best desert in 2004) have been recognized, demonstrating the intensity and the success of this young chef’s trajectory.

More recently Alija has developed projects parallel to his activity in the kitchen such as the Course on Creativity in Arteleku with Juan Luis Moraza (2006) or the creation of a temporary garden with the artist Artur Bossi (2007). He has also collaborated on research on cancer prevention through diet with Dr. Jesus Garcia Foncillas (2008) and has worked on environmental projects such as the “Buy Green” day organized by IHOBE in 2009. In 2011 he received his first Michelin Guide star and three “Suns” In the Repsol Guide.

The International Gastronomy Academy awarded him the Chef of the Future Prize in 2011.

Josean, What would you say to someone who doesn’t know Bilbao to convince them to come visit?

Bilbao is a city that has evolved so much, but has maintained the traditional architecture while integrating new designs and social spheres. I can say that Bilbao has a perfect equilibrium between the traditional and the innovative in its expansive cultural offerings. Bilbainos are proud to show off their city because the streets are full of history and there’s a very special way that people interact with each other that the city ends up seducing you.

My work allows me to travel and get to know other cultures and this is so interesting and inspiring to me. But Bilbao offers me affection: the people, the security…and the speed with which you move is fantastic. Besides, if we talk about the cuisine, every moment you have different options to enjoy. But there is one unique thing that I only see in Bilbao: it is the hearts’ reverberations when there is a football game at San Mames.

I like to walk from one end of the city to the other along the estuary because in addition to being a very enjoyable walk, you can observe Bilbao’s evolution all the way from the deepest tradition in the old town to the most avant-guard in the vicinity of the Guggenheim museum.

I am lucky to live in the Casco Viejo and work in the Guggenheim Museum so every day I get to walk along the Ribera market, the Arriaga Theater, the town hall, the Calatrava bridge, the Izosaki towers, the Salve Bridge (restored for the Tenth Anniversary of the Guggenheim Museum by the French artist Daniel Buren), finally arriving at Nerua, tucked in the Guggenheim where I can see the giant spider by Louise Bourgoise or the metal balls by Anish Kapoor with the recently built Pelli Tower in the background.

And a perfect night?

I have very good friends who are chefs and few opportunities to enjoy their cooking and hospitality, like Guillermo Fernandez from Baita Gaminiz, Aritzeder or Gorka Petralanda from Indusi, Bitor Arginzoniz from Etxebarri, Joseba Arana from La Cuchara, Asador Horma Ondo, Txakoli Simon… and I’m sure I’m forgetting someone…

And a perfect drink at the Corto Maltes.