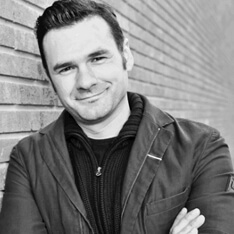 It has rained in Bilbao a lot since this news reporter started covering the streets with microphone and camera in hand, asking questions of the city’s residents. His professional career has been highlighted on TeleBilbao and wide-audience programs on ETB such as “Pásalo” that reached 1,419 episodes, or the debate featured on “The Conqueror of the End of the World,” which made him one of the star presenters of Basque television. Currently, Iñaki Lopez receives offers from national channels such as Antena 3, Telecino or Cuatro.

Iñaki, what would you say to someone who doesn’t know Bilbao to convince them to come visit?

In very few cities are you going to find an offer as complete as Bilbao. We haven’t left out a single detail! Culture, architecture, cuisine, shops…and in just a few minutes on the metro: beaches, nature, the old Algorta port, the Portugalete Bridge, Plentzia, the sardines at Mamarro in Santurtzi…. As I said, there’s offer a galore that much bigger cities can’t even dream of having.

And later…the icing on the cake: the Bilbainos! This is what makes the capital of Vizcaia exceedingly rich and what is incredibly scarce in other parts of the world…

What do you miss when you are away?

The passion of living life in the street that we have in Bilbao. Bilbao’s bad weather has never something that makes us go out in the street less. Even in those so-called “Mediterranean” cities where the climate is so much better, it is not nearly as common to see large groups of people out in the street as habitually as you do in Bilbao. Perhaps we have a tendency for riots and civil disorders sometimes, but I love this enthusiasm for being in the street with whatever objective, be it ludicrous or vindictive.

A perfect day for Iñaki López…

A good day for me would necessarily start late—if I have to get up early, it’s not a good day. Waking up early and happiness are incompatible concepts for me. This being so, I would leave the house and go directly to eat lunch. I love fish so I would opt for Perro Chico in the old Bilbao, or the rice at La Kuina en the Casco Viejo, or, if the plan is to save a little money, I would go to have cous cous at the Bere-Bar on San Francisco. I’d go shopping at Bola 8 in the old part of town, Power Records, Flamingo Records, Bolan records in Indautxu, (what great record shops we still have in our town!) and the very best bookstore: Joker on the Alameda Urquijo. And later in the afternoon I would go for pintxos at Bitoque de Albia on Mazarredo, the Jardines street in the Casco, Irrintzi… At night—my favorite time of day without a doubt, a very curious contradiction, I know—the ideal would be a concert at the Antzoki or Azkena, a few beers at the Residence de Manu, a cosmopolitan prepared by Narciso en Bitoque and then go down to the Casco and get lost at Guretxoko, Kogoio, Katu, Muga, Iturribide….“until the sun tells me it’s daytime” as Barricada sang.

In Bilbao there is a night for every necessity. If you want to surprise someone and you’re going full blast, Kate-zaharra is the best option. There are excellent places like Bascook or Zortziko to live like a king. And the offering of restaurants in Bilbao doesn’t stop growing, with surprising places like La Mina in the old part of town. If your night is more in the real-time mode of the economic crisis, the hamburgers at HDH in Indautxu or Peggy Sue’s in Poza, or the famous hamburgers at the Florida in Campuzano. Such a big offer! For after supper I always look for a place with good music. None of this formulaic and boring radio and drag of pop-star hits du jour. I’m not in to that, us rockers we are of the selective kind with a good ear. Azzurro in the city center, Barrenkale, Iturribide, the devil’s floor at Le Club, the Azkena…fortunately we have many options!

Is there some unknown corner you would recommend?

I keep thinking that incomprehensibly there are a number of Bilbainos who do not allow themselves to explore the old Bilbao… and I do not understand it. This neighborhood offers in itself a worthy museum in the form of a renovated church, concert halls, good-for-nothing bars, restaurants from an ancient lineage, of the cheap, exotique, dignified buildings of the Gran Via, Bilbao Arte, walks, history, a different shops… it’s all there to be discovered, that which hasn’t been already been seen. Another recommended corner? Olabeaga. A drink at La Karola is truly revitalizing.